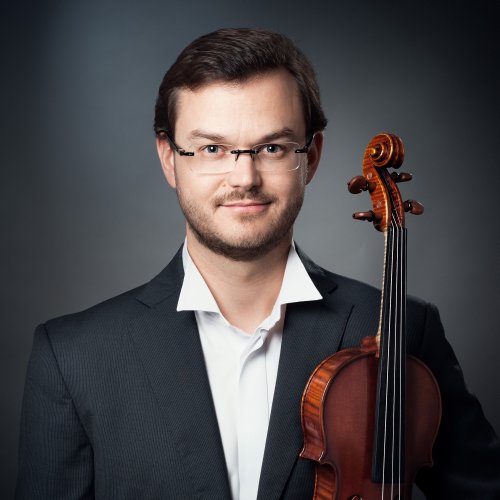 He is also an active chamber musician. He plays alongside pianist Ivo Kahánek and cellist Tomáš Jamník in Dvořák Trio, one of the best Czech chamber ensembles. The Trio has excelled in competitions (Beethoven’s Hradec, Bohuslav Martinů Competition) and on concert stages both in the Czech Republic and abroad. The ensemble has appeared at festivals including Styriarte Graz, Dresdner Musikfestspiele, Mainzer Musiksommer and in renowned concert halls of Berliner Philharmoniker and in Elbphilharmonie, Hamburg.

Outside the Czech Republic, he has performed in Germany, Austria, Slovakia, Slovenia, Italy, France, Poland, Japan and the USA. He records music for TV and radio and took part in recording the CD “Tribute to Jaroslav Kocian” to mark the 40th anniversary of the Kocian International Violin Competition as one of the laureates.

He mentors at the MenArt scholarship academy and is also an active teacher. He regularly teaches at music courses such as the Ševčík Academy in Horažďovice, Music Academy in Telč, Music Connexions in Soběslav.

His first violin teacher was Hana Metelková and he later studied with Jaroslav Foltýn at the Prague Conservatory. In 2003, he graduated at the Carnegie Mellon University – School of Music, USA, having studied with Pittsburgh Symphony Orchestra concertmaster Andrés J. Cárdenes.

He has broadened his musical education at various masterclass courses, such as in Semmering, Bonn or at the Meadowmount School of Music (founded in 1944 by Ivan Galamian), where he studied with Stephen B. Shipps. He also took part in masterclass courses with Pinchas Zukerman, Gil Shaham and Joseph Silverstein.