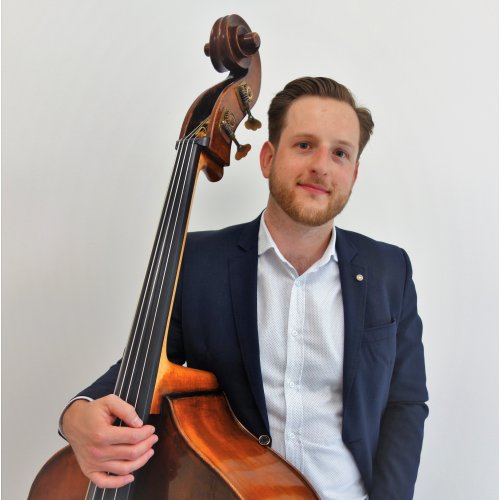 is a member of the Czech Philharmonic bass section and a regular guest performer with the Wiener Staatsoper and the Wiener Philharmoniker. He began studying bass performance at the Pilsnen Conservatory under Martin Koukolík, and later continued at the Prague Conservatory under Petr Ries and at the Academy of Performing Arts in Prague under Jiří Hudec. After studying as an exchange student at the Royal Academy of Music in London, he completed his studies at the HfM Freiburg im Breisgau in the prestigious bass class of Božo Paradžik. He has won a number of awards in national and international competitions (e.g. First Prize at the Conservatories Competition 2011, First Prize at the F. Simandl International Bass Competition in Blatná, Czech Republic). In 2019 he won the International Solo Bass Competition in Lucca, Italy, the prize of which was to perform as a guest soloist with three major European orchestras: the Dresdner Phiharmonie, Oslo Philharmonic, and the Orquestra Sinfónica do Porto Casa da Música.

In addition to playing the bass, Tomáš Karpíšek is also a composer. He studied composition at the Pilsen Conservatory under Jiří Bezděk and has attended composition seminars in the United Kingdom and Germany. His Sonata for Flute and Piano won Third Prize at the Generace 2010 International Composers Competition. His two Suites for Unaccompanied Bass (No. 1 – Liturgic and No. 2 – Images of Lapland) were published by Recital Music (U.K.). The first suite was also selected as a mandatory piece at the F. Simandl International Bass Competition 2016. Recital Music has also ordered several compositions from Karpíšek. As a composer and arranger, Karpíšek works with the J. K. Tyl Theater in Pilsen. His compositions have been performed in both the Czech Republic and abroad at festivals such as Max Reger-Tage, BASS2016 Prague, Smetana Days in Pilsen, and the Contemporary Music Days in Prague. His symphonic suite, Stories of Don Quixote, was premiered by the Pilsen Philharmonic and broadcast by Czech Radio’s “Vltava” station in May 2015. Karpíšek’s most ambitious symphonic work so far is Mže – Amnis Iter, a fantasy for large orchestra which was performed by an international youth orchestra in Pilsen, Czech Republic as a part of the 5 RIVERS – 5 ŘEK project, under the auspices of the Pilsen – European Capital of Culture 2015 project.