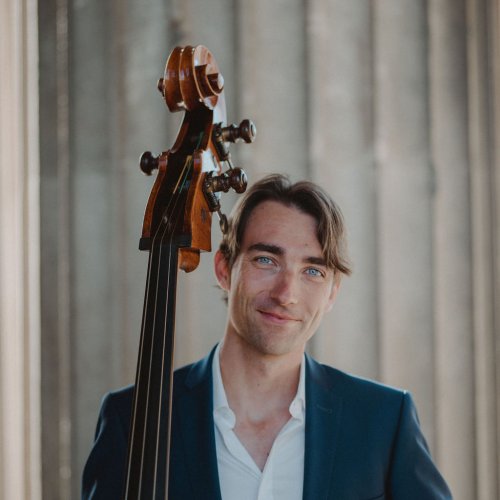 As the first prizewinner of six major international music competitions including the ARD-music competition Munich 2016, the Bottesini competition in Crema 2017 and the German Music Competition 2015 - being the only double bass player in history to win this competition -, Wies de Boevé is considered one of the most successful double bass players in Europe. Born in Belgium, he started his studies in Antwerp and continued in Zurich with Duncan McTier. He went on to become a member of the Berlin Philharmonics’ Karajan Academy and finalized his studies with Božo Paradžik in Lucerne and with Matthew McDonald in Berlin. As a soloist, Wies de Boevé performed with orchestras such as the Bavarian Radio Symphony Orchestra Munich, the Konzerthaus Orchestra Berlin, the Munich Chamber Orchestra, the Brussels Philharmonic and the Lucerne Symphony Orchestra. He is in demand as a recitalist and as a chamber musician throughout Europe. His first CD of 19th and 20th century music for double bass and piano was released on Genuin in October 2016 and was internationally well received. In 2020 Warner Classics realeased Wies de Boevé’s second CD as a soloist which is completely dedicated to the concerti by Giovanni Bottesini.

Wies is Co-Principal double bass of the Bavarian Radio Symphony Orchestra and a regular guest player with among others the Berlin Philharmonic, the Royal Concertgebouw Orchestra Amsterdam, the Vienna Philharmonic and the London Symphony Orchestra. He teaches at the Zurich University of Arts and at the Academy of Bavarian Radio Symphony Orchestra. He recently held masterclasses in the Escuela Superior de Música Reina Sofia in Madrid, the Royal Academy of Music in London, and at the Universities of Amsterdam, Antwerp, Maastricht, Munich, Paris, Rotterdam, Turin, Thessaloniki and Zurich. He has been coaching the double bass section of the European Union Youth Orchestra since 2013.